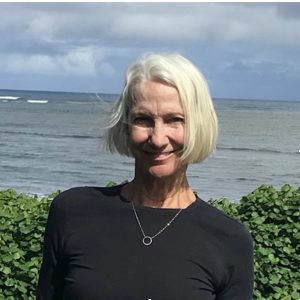 Lorenn Walker is a Hawai’i based social scientist who studies how people learn, increase resiliency, and cope with trauma and social problems. Her background in education, law, public health, restorative justice, solution-focused brief therapy, and her personal experiences inform her approaches to issues commonly addressed by criminal legal systems.

She designs, implements, researches, writes, publishes, and trains others on a variety of innovations. She works to serve individuals and organizations by sharing research outcomes that assist in finding healthy and positive mindsets no matter the circumstances. She has a special interest in helping disenfranchised people including foster youth, people facing housing and financial difficulties, crime victims, incarcerated people, those with substance disorders, loved ones and the community of all affected, find ways to meet their needs.

She is also interested in assisting aging people, and others with health challenges, achieve fitness and healthy lives.

Much of Lorenn’s research and work is conducted as director of Hawai’i Friends of Restorative Justice, which she has worked with for over 20 years. Since 1994, she has been a University of Hawai’i system lecturer. She has taught a variety of courses including public speaking, criminal justice, restorative justice, and ethics.

Phil Zimbardo, Stanford University prison experiment principal researcher, and author of The Lucifer Effect: How Good People Turn Evil, says Lorenn’s “work is wonderful.” Dr. Zimbardo also endorses the restorative and solution-focused individual reentry planning process for incarcerated people that Lorenn developed with help from her teacher the late Insoo Kim Berg. Almost 800 people have participated in the reentry circles based on an idea shared by John Braithwaite in 2001. The circles and/or aspects of them have been replicated in other places including New York, California, Washington DC, Delaware, Pennsylvania, New York, California, Brazil, Hungry, Spain, Serbia, Bermuda, Japan, and Finland.

The National Conference on Restorative Justice awarded Lorenn with the 2011 John W. Byrd Pioneer Award for Restorative and Community Justice. The Solution Focused Brief Therapy Association of the United States awarded Lorenn with the Steve de Shazer Memorial Award in 2015 “in recognition of significant contributions to the field of solution-focused brief therapy over many years.” Lorenn is also a Senior Fulbright Specialist for international peacemaking and conflict management skill building training. Please see her CV for other awards.

Lorenn’s unique background enables her to connect with people harmed by social injustice and crime, those who caused it, along with their communities and harmed loved ones; along with people who work with the legal system.

Lorenn left her family home due to social difficulties when she was 14 years old, dropped out of high school at 15, and was adjudicated as a juvenile offender at 16 after she spent a short time in jail. She became a parent at age 18. That year she also enrolled in St. Nicholas Montessori Teacher Training Centre distance learning course from London, England. Lorenn earned her Montessori Teaching Certificate in 1971 when she was 19 by completing the course’s applied training at the University of California San Diego that was led by Margaret Homfray and Phoebe Child, who were both Dr. Maria Montessori’s students.

Lorenn began teaching at the Children’s House in Santa Cruz, California, at age 20, where each morning started with a circle. She became the school director when she was 22 years old. In 1975, she moved to Hawai’i where her grandparents and father lived in the early 1900s.

https://www.theforgivenessproject.com/stories-library/lorenn-walker/An unknown, and never apprehended assailant seriously injured Lorenn in an attempted rape and murder. The assault motivated her to go to law school (NPR story) and caused her shame that she overcame and forgive herself for about 20 years later (The Forgiveness Project).

In 1980 after graduating from the University of Hawai’i, Lorenn attended Northeastern University Law School in Boston. She returned to Hawai’i and practiced law in Honolulu though her 30s. She left mainstream lawyering at age 41 to earn a masters degree in health education. Since 1996 she has been using a public health approach in working with the criminal legal system and assisting people facing hardships find peace and healing.

From 1984 to 1994 Lorenn was a Hawai’i deputy attorney general and defended state agencies and employees including the state’s education, welfare, and prison systems. She also prosecuted people and organizations for fraud and corruption.

From 1994 to 1999, she was a guardian ad litem for children in child abuse and neglect cases, and a defense lawyer for indigent children and adults charged with crimes and with child abuse in Hawai‘i’s family court.

In 1998 and 1999, she was the President of the Child & Family Advocacy Section of the Hawai’i State Bar Association.

A life-long surfer, former champion windsurfer, triathlete, wife, mother of three children and four grandmother, Lorenn is living proof of how to transform conflict into resiliency, and how to age with strength.

In 1999, at the age of 47, Lorenn was the Hawai’i State Woman’s Windsurfing Champion. She has been sponsored for athletic performances for many years (see her sports resume above for more).

As a University of Hawai’i lecturer for over 20 years, Lorenn has taught thousands in a variety of subjects including personal and public speaking, conflict management skills, restorative justice, criminal law, and ethics. Many of her public speaking students have been their college class speaker at graduation (Barack Obama inspired Lorenn in 1980 when he competed in a Hawai’i high school debate competition.

In addition to her Montessori teacher training, Lorenn earned an associate in arts degree from Leeward Community College, Pearl City 1978; a bachelor’s degree in communication from the University of Hawai’i, Manoa 1980; juris doctorate degree from Northeastern University School of Law, Boston 1983; masters degree in health education from the University of Hawai’i School of Public Health, Manoa 1996.

She is a lifelong learner and continues to take courses and engage in opportunities to increase her skills and understanding.

Lorenn frequently speaks and conducts training on restorative justice, conflict management, improving the legal system, as well as physical and emotional health and fitness, especially for the aging, and people facing challenges.

Newspapers, television, and radio have interviewed her numerous times including NPR, OWN and CNN about her justice related work. She is the author of several books including Aging With Strength, Restorative Justice Today, and many articles. She also serves on the editorial review boards for academic journals.

Lorenn is married and the parent of one daughter and two sons. She lives with her husband on the North Shore of O’ahu, a mile and a half down the beach from her daughter, son-in- law, and three grandchildren’s Hawai’i home.

She especially enjoys snowboarding, mountain biking, running, surfing, and skateboarding with her family and friends.

To contact Lorenn please call in the US: 808 218-3712 or email her at: lorenn@hawaiifriends.org or lorenn@hawaii.edu.

“Each individual has a universal responsibility to shape institutions to serve human needs.”