Skip to content
Lorenn April 26, 2018 at Doris Duke Theater in Honolulu with Norm Hewitt, former All Black Rugby player from New Zealand, who is featured in documentary Making Good Men. Norm discusses his experience being victimized in his youth, his becoming a bully himself, and how he reconciled with Manu Bennetl.
2017 Sage Videos: Redefining Justice: the Restorative Approach

Lorenn Walker – Heroine of Forgiveness from World Voices on Vimeo. 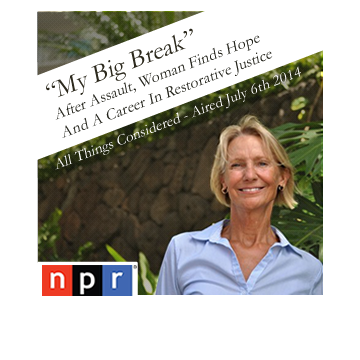 Lorenn interviews for the “My Big Break” radio series aired on NPR’s All Things Considered.

Visit NPR for the transcript

Lorenn stays active by participating in XTERRA events, see if you can spot her in the latest
XTERRA video!