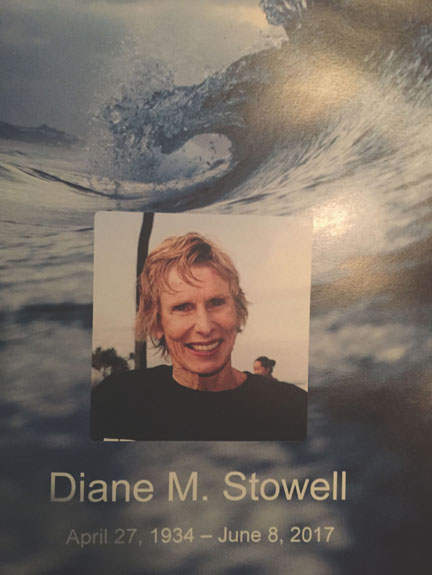 Aloha and mahalo Ian. You meant so much to Diane. She would be so happy to know you are reading this for me.

My name is Lorenn Walker. I met Diane Stowell when I recruited her to work for the Hawai’i Friends of Restorative Justice 15 years ago.

Restorative justice is about healing and giving people the opportunity to find what they need to repair harm after being hurt and hurting others.

Hawai’i Friends’ designs, provides, studies and publishes papers and books about restorative processes for people who’ve been harmed by crimes, social injustice and substance abuse. Our work has included meeting with people in their homes who have been harmed, and with people who have also harmed others.

Many people we work with have cases in court, and many are in prison.

We facilitate discussions about what people need to repair damaged lives and relationships, including what they need to deal with shame and resentment, and how to achieve the life of their dreams.

In 2002, I needed someone who had therapeutic skills and who would not be afraid to do some of this work with me.

I thought Diane Stowell would be ideal, and I wanted to get to know her. I wanted to meet the woman who was 18 years older than me who got up in the dark and cold to swim and run laps.

Diane Stowell embodied a person who was my ideal. She was living proof that aging with strength was possible; that age is only a number, and ageism is a bias we need to end.

When I called Diane about the project she quickly agreed to work for us, and she became my trusted partner for over a decade in innovate programs and research studies, that are published and referenced throughout the world today.

Diane was always dependable to go anywhere to meet people who were suffering the most serious difficulties, from losing a son to murder to meeting with people in prison who had killed others.

Countless times Diane went with me into the homes of people who plead guilty to violence, including one young man who was addicted to crystal methamphetamine and was scaring his family with violent threats.

The man’s mother knew her son needed substance abuse treatment and medical help. The family tried the police and punishment, which was unhelpful. His case was in court and the judge offered the man and his family our restorative help.

Diane and I met with him and his family in their home a few days after court. We were able to get him hospitalized and into treatment instead of having him jailed.

The judge said: “Lorenn, is that safe?”

I said: “Diane’s driving. I’ll sit behind him in the backseat. We’ll be fine.”

And we were fine.

We got the man to the hospital, which was his path to recovery, and healing for him, and his family. Years later, he was clean and doing well.

Diane was also an important partner in our first prison program. She helped to provide reentry circles for imprisoned people to make amends with their families, and helped children deal with the trauma of losing a parent to the criminal justice system and prison. Diane also helped provide our first classes on conflict management and restorative justice at Waiawa prison.

She learned every man’s name in the class by the second meeting. When she had to have some skin cancer cut off her scalp one day, she came to class with a bandage around her head with some blood seeping out the side, down her neck. I told her she should go home, but she insisted on coming to the class: “Working with the guys helps me Lorenn.”

In class, the men were concerned when they saw her, but thought it was just like Diane to come despite her injury.

Working with Diane in the prisons also introduced me to another mentor and inspiring person, Jackie Young, Diane’s classmate, whose influence on our work, and her advice and counsel to me personally, has been transformative.

Diane also opened her Manoa home to many trainings and meetings we had with people from all over the country and world. And like she did for so many others, she gave me an open invitation to stop by anytime, whether she was home or not, to rest, take showers after running, surfing, swimming, and to always take a home-­‐baked cookie out of her freezer.

One special attribute I think Diane had that we could all use today, was dealing with people who have different political leanings than our own.

Diane treated people with tolerance and understanding. We had very different political preferences, but she never judged me as a person or insinuated I was an inferior because of who I voted for. I believe that Diane understood we could have different opinions, and not take politics so personally and act mean spirited towards others. She modeled a respectful way of disagreeing that is sorely needed today and something we can emulate.

No matter what, I will not give up noticing when I begin to judge people. I will keep trying to see some goodness in everyone, even those who accuse me of being a “liberal elitist” although I am a high school dropout who was on my own at age 14.

People meant the most to Diane Stowell and helping them was her second nature. She spoke often and with great love, pride, and respect especially of her children Denise and Dean, and her three dearly beloved grandsons.

Diane’s death has created an abyss of loss and sadness for me, both professionally and personally, but her bright spark of energy, love, and compassion that she left, remains alive and kicking in my heart and my actions.

The inspirational torch that Diane gave us is passed on in our work and actions. When we leave this planet, we too can forward Diane’s competency and compassion by giving to others who likewise will continue passing on care and love.

We too can leave a trail of dignity and love that Diane Stowell shared so freely. We too can look for the goodness in all people regardless of their suffering, bad behavior and political leanings.

We too can share tolerance, our hearts, and a place to sleep, a shower, and a cookie for someone in need. Mahalo for this opportunity to speak about one of my most important “sheros” Diane Stowell. Her love and excitement for people and life lives on.

Scan this QR code which links to many of Lorenn's published works.